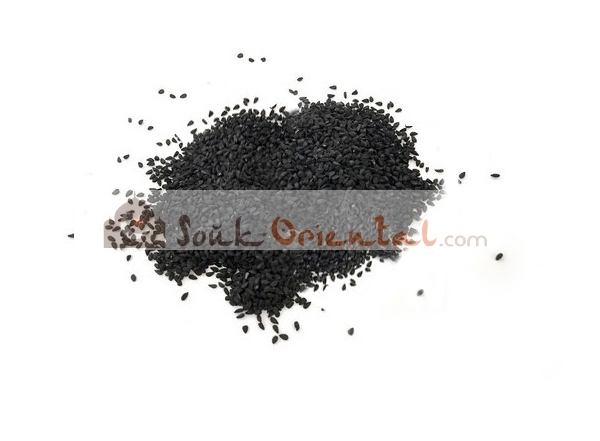 Also called "Black Cumin" seeds of Nigella are used not only for cooking especially to flavor breads, but also for healing.

Notify me when available

Also called "Black Cumin" seeds of Nigella are used not only for cooking especially to flavor breads, but also for healing.

The seeds sold by Oriental Souk come directly from Tunisia where they are prepared and milled the traditional way, by hand.

Our seeds are handpicked - Choose this option before placing in cart.

All our seeds are pure dye free, preservative or adding various ...

The Prophet (prayer and salvation be upon him) said:
"Take care of yourself by using the black seed, is a panacea against all evils except death. "

Here is an overview of the qualities and virtues of the black seed that is a sure sign, among many others, the prophecy of our prophet in the medical field.

The prophet has indeed taught for over fourteen centuries that "black seed"was a remedy
against all evils.

The black seed is a plant that has been widely used as a treatment for over 2000 years. Modern experiments have shown that Nigella sativa had an effect of bronchiectasis, an antimicrobial effect, a regulatory effect on blood pressure and a secretory effect on bile. This observation led us to believe she could have a stimulating effect on immunity.

The black seed is composed of active elements having good taste and produce a miraculous effect.

It contains calcium phosphate, iron, phosphorus, carbo-hydrate, species that form the bulk of its power.

It contains antibiotics that can destroy any virus, bacterium or microbe, carotene to its anti-cancer drugs, sex hormones and nutrients exciting.

It also has the power to facilitate the elimination of urine it contains enzymes antacids, painkillers but also factors stimulating the development of intelligence.

What is Black Seed?

Black Seed is a traditional herb used for thousands of health including the Middle East. It is also known as the blessed seed.

What are the essential properties of Black Seed?

Black Seed contains more than 100 components, many of which remain to be discovered. It is a rich source of unsaturated fatty acids and contains about 35% fat, 21% protein and 38% carbohydrates. The oil is composed of 50% essential fatty acids. Linoleic acid and prostaglandin E1 gamma It. s, helps the body fight infections, balances the immune system and regulates allergic reactions. Gamma-linoleic acids also stabilize the cell membrane. Black Seed also contains volatile oils consisting of 5-1.5% and nigellone thymochinone true antihistamines, antioxidants, anti-infectives, one effect of bronchiectasis.

What are some traditional uses of Black Seed?

Traditionally, the black seed is used for various treatments related to respiratory health, stomach and intestinal diseases, stimulation of the immune system but also kidney and liver function, circulatory and to improve general health . It also has properties that will be used against eczema, psoriasis, arthritis, inflammation, and scalp massage.

What were the scientific research on the black seed?

Since 1959, more than 200 university and international publications have demonstrated the remarkable results revealed nearly 1400 years. In 1960, Egyptian researchers confirmed that the effect nigellone had proven bronchiectasis. Recently scientists in Europe have confirmed the anti-bacterial and antifungal oil nigella seeds. These researchers from the Cancer Institute and cons of a laboratory in Immuno-biology have found that Black Seed stimulates immunity and bone marrow cells and raises the interferon production, protects cells against viruses, destroys cancer cells and increases antibody production.

What are the effects of black seed on the immune system?

By the formation of prostaglandin E1, the immune system is harmonized and allergic reactions are stabilized. Also preventing infection, the immune system can prevent and control chronic diseases. Healthy cells are protected for their effects against harmful viruses, preventing tumors and consequently prevents the proliferation of harmful microorganisms.

What are some other effects of Black Seed?

Black cumin seed helps the metabolism, digestion, and lowers blood sugar in the blood. It is useful in the treatment of diabetes. For digestive diseases, black cumin seeds stimulate bile and regulate internal disorders, improve digestion, and are under fight worms and parasites from the intestinal tract.

What are the overall benefits of Black Seed?

The black seed is a plant that has very many virtues, especially since she manages to keep his immune system strong and healthy. It is also very useful for individuals with a weakened immune system or asthma and respiratory problems, kidney problems or liver, intestinal and digestive problems, arthritis, allergies and hay fever , of acne and other circulatory ailments. Black Seed is a safe and excellent plant that can be used by anyone. It has no known side effects and has a long history of use for several thousand years.